It was a beautiful drive down. 3 hours, 150 miles. Clear skies, warm, mountains so green and beautiful it was almost painful. And considerate drivers. Wonderful.

Scott stayed home with EKA and Kate. He single dad-ded it with help from Joanne and others. They did great and I’m very grateful he was willing to tackle 30 hours without mama to help.

A herding gal I admire offered to trial Bing for me some time ago. I gratefully accepted as I wasn’t sure I was physically or mentally up to tackling cattle with Bing. Bing can be a fast boy and I’m pressed at the best of times to keep up with him – mentally or physically. They worked together for a few minutes on cattle on Saturday. They made friends over chicken and Bing accepted Catherine as his herding partner. He demonstrated he was willing to follow her cues. Phew!

Sunday dawned wet and dreary. It rained for a bit, fortunately lightening up and ultimately clearing. Bing works well in damp weather and I had my winter herding gear with me so we weren’t perturbed. Cool weather is kinder to the stock and dogs. The grounds drain so well the rain was a non-issue.

The herding grounds were fabulous – well draining sand foundation, heavy duty stock panels, cooperative stock and lots of knowledgable hands helping. We worked the cattle in groups of five. There were sheep and ducks in addition to the cattle. We were there for the cattle. The cattle were a mix of horns/ no horns which was kind of neat. They jostled and poked each other in the pens and in the arena. They seemed BIG.

I walked Bing for a bit before his turn. He was very aware of the steer and highly interested. He barked a bit, no doubt voicing his opinion of how things ought to be done.

His turn came and I passed him to Catherine. He looked back at me a couple times as they entered the arena – I high tailed it for the stands opposite the entrance.

The AM trial was ASCA Course B, Started. 5 steer. Course B is a gather then around the ring clockwise thru some panels ending with a repen. Things didn’t go quite as planned – he wound up in a counter-clockwise direction. So no Q. What I was looking for was a willingness to work, persistence when the cattle got opinionated, and a partnership with Catherine. And he gave all that just fine. There were some minor communication problems – Bing doesn’t know nearly as much as Catherine’s dogs and is missing some key commands as yet. Catherine was patient and calm and her expert handling made for some nice teamwork.

I was delighted to see Bing move the cattle and I think Bing enjoyed the experience too.

Bing’s next run was Course A. Counter clockwise, and instead of a gather there is a take pen (holding pen for the dog to bring the cattle out of). Catherine and I had debated whether I should hide, opted not to. When they began their run Bing went looking for me instead of working. When he started peering thru the fence for an escape I took off and hid. So I missed his run, but he began working for Catherine at that point.

They got the cattle around the course. Their work was smoother and quicker than the morning run. The bits I saw were awesome for a dog who has had probably less than a cumulative two hours on cattle over a few days last year and the previous day.

The drive home was wet but uneventful. Bing slept curled up beside me most of the way home. Contented Corgi Cattle dreams. 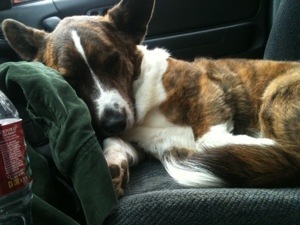 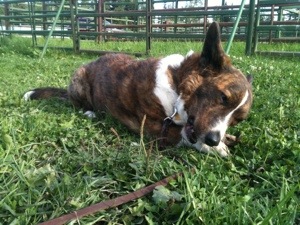 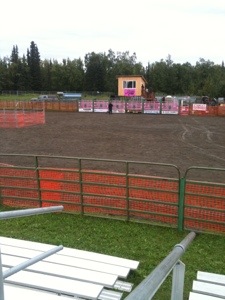 This entry was posted in Dogs. Bookmark the permalink.